Doctors save a first-time mom, and her miracle baby

Savanna Sigmon’s Sunday morning was unfolding like any other. She and husband Brett, sat in the congregation for the 9 a.m. service at Real Life Church near Denver, North Carolina.

Then Brett, the church’s worship pastor, moved onstage for the 11 a.m. service. Savanna switched to her volunteer role in the church nursery, caring for newborns whose parents were at the service.

That’s when Savanna’s head began hurting. Eating and drinking fended it off for a few minutes. Her fellow volunteers in the nursery turned off the lights, thinking that might help, too.

But the pain intensified. Savanna, 27, said she was having trouble seeing.

She went into a seizure and collapsed.

“Run and get Brett,” someone said.

Savanna was rushed via ambulance to Novant Health Presbyterian Medical Center in Charlotte. It was Oct. 7, 2018. Savanna wouldn’t remember anything for the next 24 days.

A cluster of blood vessels in her brain had burst. Her life was in danger.

Savanna also was 21 weeks pregnant with the couple’s first child.

The young couple – who’ve been married about three years – had never heard of Savanna’s condition, known as AVM (arteriovenous malformation), an abnormal tangle of blood vessels in the brain. Most people who have AVMs are born with them. They occur in less than 1% of the population.

Until then, Savanna hadn’t had any health issues during her pregnancy.

“She was in critical condition and could die from this brain bleed,” said Dr. Eric Deshaies, a Novant Health neurological surgeon who operated on Savanna. “It was a massive brain bleed.”

The AVM was large and caused extra fluid that needed to be drained. Deshaies and the other medical staff battled the delicate balance of trying to save Savanna’s life while also monitoring her unborn child.

CT scans had to be delayed or limited. Certain medications couldn’t be used because they could be harmful to the baby.

“At that point, I was wailing,” Brett added. “I had lost it (emotionally).”

By that time, about 50 church members, many who are close friends with the Sigmons, gathered at the hospital where they were sprinkled through waiting rooms and hallways.

Savanna’s parents and Brett were hustled to the radiology unit following a diagnostic test. They were questioning Deshaies: “What’s Savanna’s outcome? What are her chances?”

The answers were numbing. Savanna likely would end up on life support or in a nursing home, they were told.

“I remember his exact words,” Brett said. “He said `We’re gravely concerned. The chances are not good.’”

Deshaies: “She was in a life-or-death situation minute-to-minute for a couple of days. We talked to the family about the possibility that she might not survive.”

What about the baby?

The AVM rupture paralyzed the left side of Savanna’s body. She spent the next two months in the intensive care unit. The first seven days after her surgery were critical because of severe swelling around her brain.

Savanna couldn’t speak, so the medical staff and her family asked her yes-or-no questions that she could answer with a thumbs-up. They kept it simple, testing her comprehension. “Is your name Savanna?” (Yes, thumb up.) “Do you have a dog?” (No, hand closed).

She was surrounded by machines that helped keep her alive.

A few days after surgery, Savanna’s dad excitedly woke Brett, who had dozed off nearby.

Brett walked into Savanna’s room to see that’d she’d written the word “juice” on a sheet of paper. Perfect handwriting. It was hers. Brett recognized it.

She’d pass notes to Brett that read “cold apple juice, please” over the next few days.

Savanna, who knew sign language, also tried to sign messages. Brett would film them and send to friends to help with deciphering. All her messages had the same theme – what about the baby?

He’s fine, they told her, truthfully and thankfully. The baby’s health was a major concern – and hurdle – for the medical team. Equipment used to diagnose Savanna’s illness required radiation, which in large doses could damage the fetus. So, lead protectors (aprons and collars) were placed strategically around Savanna.

Medications used to treat Savanna’s brain pressure (from the additional fluid) and blood pressure were limited and their side effects had to be closely monitored. If Savanna’s blood pressure was lowered too much, it could dangerously limit blood flow to the baby, Deshaies said.

Savanna also faced the challenge of trying to regain use of her left arm and leg.

Deshaies said that of the patients who have an AVM rupture, about 50% die or have significant neurological limitations. The situation was more stressful because there were two lives to consider during each medical step.

“We had to postpone certain aspects of treatment,” he said. “Mobilizing the patient became harder because of the baby. The side effects of medications. There was a pneumonia risk. Everything took more effort, thought and consideration.”

Savanna said her first recollection was Oct. 31, when she awoke in the hospital and didn’t know how she got there. Brett was decorating the room for Halloween.

“I remember wanting to know if everything was OK with the baby,” she said. “Everything had been flipped upside down.”

Savanna’s recovery was steady. The swelling slowly dissipated. She no longer needed machines to help her breathe or eat. Eventually, she could whisper a word or two at close range. 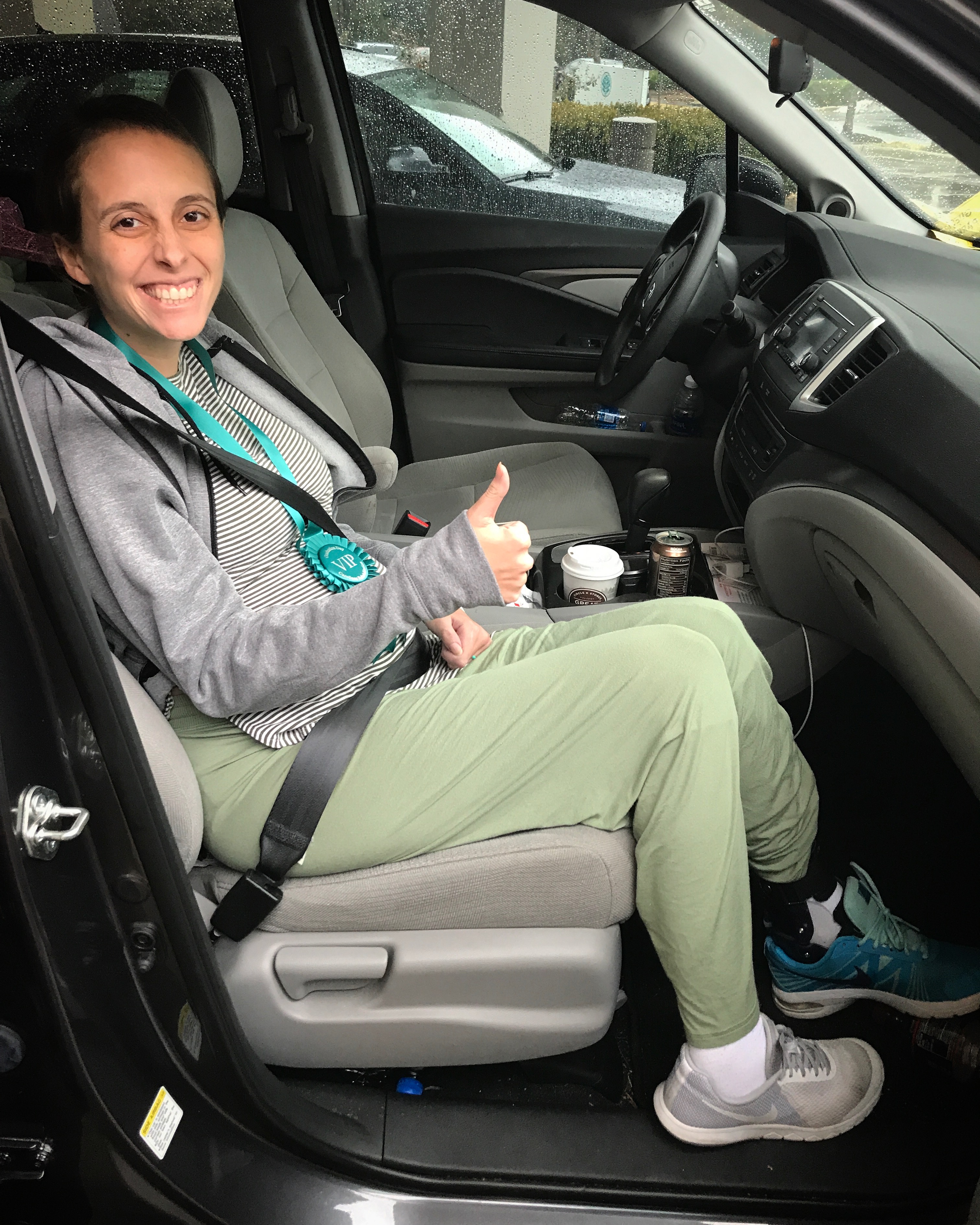 That blossomed into talking. After not hearing his wife’s voice for a month, Brett, 31, cried tears of joy.

Savanna’s next step was going to a rehabilitation facility, where she worked on regaining her mobility and strength for about five weeks. Her baby was safe and growing steadily. She returned home Dec. 20, in time for Christmas.

At the last appointment with Deshaies before her due date, he was thrilled with how well Savanna could move her arms and legs. Deshaies insisted the Sigmons bring the baby with them on the next visit.

The Sigmon’s son – named Bear Raylon Sigmon – arrived via C-section on Feb. 11, 2019, at Presbyterian Medical Center. He weighed in at a healthy 7 pounds, 13 ounces.

“It was definitely miraculous,” Brett said. “But it was a stressful day, too.”

Savanna was in pain during the delivery, and Brett worried the pain would raise her blood pressure and perhaps trigger another AVM episode. He held her hand the whole time, keeping one eye on his wife and the other on his new son.

“Once we all got back to the room, and Bear got all checked out, it was just magical,” Brett said.

At the couple’s next visit to Dr. Eleanor McCurdy, Savanna’s Novant Health obstetrician/gynecologist, Brett said the doctor was quietly taking in baby Bear and all that had led to that moment.

“We told her `That’s our miracle baby,’” Brett said.

Bear, closing in on 3 months old, has surged past 11 pounds. He’s sleeping well, eating all the time and will have an amazing family story to hear and tell in a few years.

“Anytime somebody has a baby, it’s special to grow a life inside of you,” Savanna said. “But due to these circumstances, for Bear to be here and happy and healthy is just incredible.”

We are so thankful

Savanna, who previously worked as an office administrator at Candy Warehouse, walks with a cane. She’s improving slowly, but will need ankle surgery to return to full speed. Her ankle issue is unrelated to the stroke, but the months of limited activity worsened it.

Her first Mother’s Day on May 12 is looming, too.

True to their word, the couple brought Bear to Deshaies’ office for a visit about five weeks after he was born.

Savanna is undergoing treatment for the AVM, as it had to be delayed until after Bear was born.

The Sigmons continue to be engulfed by the support of family and friends. Brett remembers having a meal or two delivered every day since Savanna was hospitalized. He smiles recalling when he was told 150 people went to the church that night, just to pray for his family. There were impromptu prayer sessions in the hospital hallways and rooms.

“Above all, we thank and praise Jesus for being with Savanna, Bear and the ones who worked with Savanna in those critical moments. He had His hand over it all.” 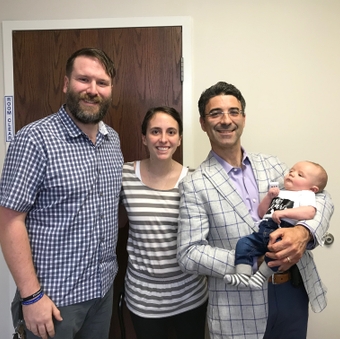 The Sigmon family with Dr. Eric Deshaies, who is holding baby Bear.
Your brain and nervous system control everything you do. Here’s a guide to help understand why specialized care is so crucial, whether you’re having a stroke or living with a chronic condition.